Cookies help us deliver our services. By using our services, you agree to our use of cookies. Further information OK
You are here:HomeLivingTown museumVirtual exhibition 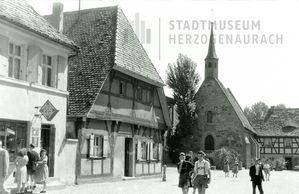 A hopeful epoch had begun that went down in the annals as the ‘economic miracle’. Images from the iconic era of the 50s offer a photographic retrospect without being purely nostalgic. Right on trend, but just for a brief episode, there was a radio and electronics shop at Kirchenplatz. 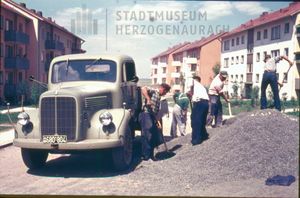 Refugees and displaced persons were poorly housed and a building boom was begun to defuse the precarious housing situation, leading to rapid suburban growth. A new residential area was established on the ‘INA-Ring’. In 1957, the Schaeffler social welfare organisation built apartments in multi-storey buildings for Schaeffler employees and their families 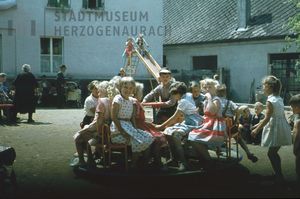 A building boom was begun to defuse the precarious housing situation, leading to rapid suburban growth. In the 1950s, a number of playgrounds were built within the community in Herzogenaurach. The playground in the ‘Schlossgraben’ was very popular. 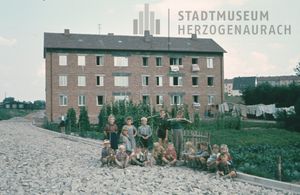 In 1956, the ‘Pfründnerspital-, Seel- und Siechhausstiftung’ (one of the oldest of Herzogenaurach’s charitable foundations) built a dwelling for nine families in Nutzungsstraße in line with the foundation's purpose. As outlined by the equally granting ‘Bavaria Programme’ launched in 1955; ‘large families should be able to enjoy a spacious apartment’. 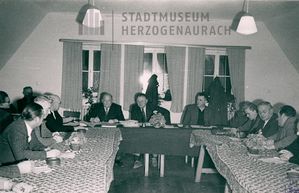 The town administration faced a great challenge to create the infrastructure for the new urban areas, including road construction and sewerage. The Town Council at a meeting in October 1951. It consisted of 17 members which had been elected in 1948. The party distribution was: CSU six members, the SPD ten members and the Non-Partisan Democratic Voting Group one member. 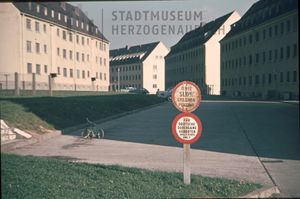 On 16 April 1945, the American troops marched into Herzogenaurach. This effectively ended the Second World War here before weapons officially fell silent in Europe on May 8th. From as early as 1950/1951 large blocks of flats were built on Flughafenstraße for the US soldiers stationed in Herzogenaurach. American families lived here for a good four decades. 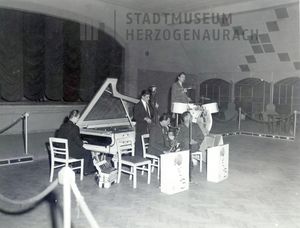 Numerous cultural events were on the entertainment program for the G.I.s organized by the US Army Special Services Division. Musicians from Herzogenaurach also participated in music sessions in the former hangars dedicated to swing and jazz. 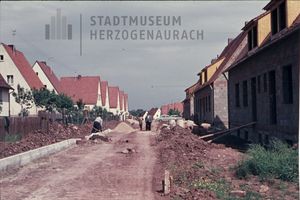 In as early as the late 1940s building cooperatives made it possible for refugees and displaced persons to create a new home for themselves. The building cooperative ‘Eigenheim’, founded in 1949, built houses on Adalbert-Stifter-Straße. Personal donation played a major role in funding the building project. 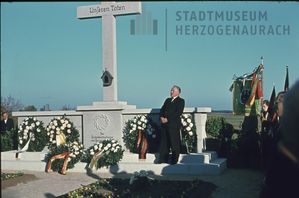 In 1954, Herzogenaurach had some 8,200 inhabitants, over 3,000 more than in 1939. A disproportionately large number of refugees and displaced persons from former German provinces in East Central Europe had found a new home in the undestroyed small town. A memorial to commemorate the fate of the refugees, for which donations were eagerly collected, was inaugurated in 1954. 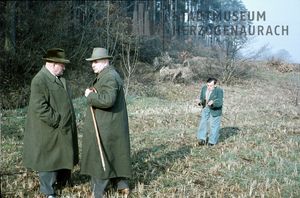 The directors' conference of the geological state offices in 1950 ‘most emphatically’ pointed out that the dowsing rod was completely useless for searching for water. Mayor Hans Maier and honorary citizen Dr. Valentin Fröhlich were not impressed by such recommendations. 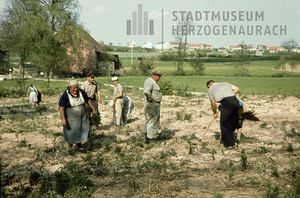 Expansion to the West

This view from the ‘Eckenmühle’, where reforestation work was carried out on the edge of the ‘Dohnwald’ forest at the end of the 1950s, clearly proves it: Herzogenaurach is also growing further west. The residential buildings on Kantstraße had been completed. 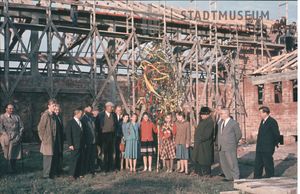 After the laying of the foundation stone in May 1952, the groundbreaking primary school building was inaugurated in time for the start of the 1953 school year. This important building laid the foundation for the further development of Herzogenaurach into a school town. In 1958 the statistics showed 1,186 girls and boys in Herzogenaurach's schools. 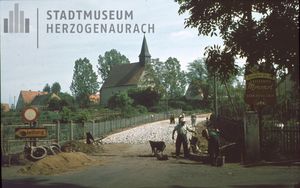 From 1902, a Herzogenaurach based association had collected money to build a Lutheran-Protestant church, which was finally erected and inaugurated in 1933. At that time it was still part of the Münchaurach parish, but thanks to the influx of many Protestant Christians to Herzogenaurach after 1945, the Herzogenaurach Protestants formed an independent parish in 1951. 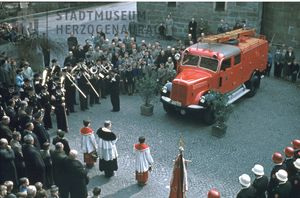 In 1956, just in time for the 75th anniversary of the volunteer fire brigade, the Herzogenaurach Firefighters received a fire truck. The inauguration took place on ‘Kirchenplatz’. 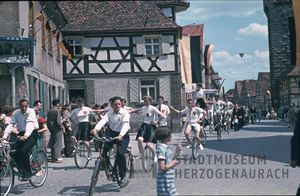 This photograph of the cycling club ‘Solidarität’ was taken in 1956 during a parade marking the 50th anniversary of the founding of the Volkschor (workers' choir). The cycling club also turned 50 that same year. 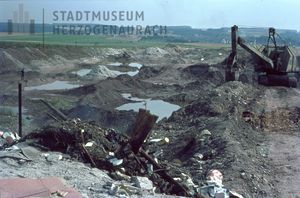 From 1949 onwards, by statute, offloading of rubbish and rubble was only allowed to take place in the designated ‘municipal rubble depository’. From 1959 this was supervised and leveled by a town worker in charge of the dump. 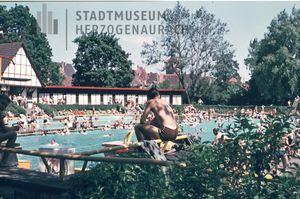 Initially reserved for US troops, Herzogenaurach’s sports pool was returned to public use at the end of the 1940s. In the summer of 1957, this popular leisure location became extremely overcrowded. By the beginning of July, as many bathing fees had been collected as during the entire season of the previous year. 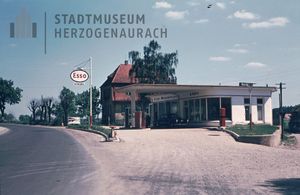 In 1956, Oswald Peetz opened a modern style ‘gas station with car care and maintenance’ at Erlanger Strasse. By the late 1950s a gas station attendant looked after a no longer exclusive, but rather broad clientele who wanted to ‘step on the gas’. 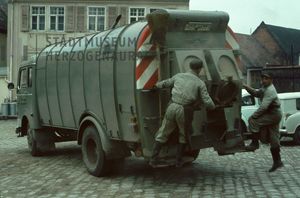 Garbage disposal was organised by the town in the 1950s "for the harmless disposal of household waste as a public health service". The first dustcart was bought from Daimler-Benz in 1953 for DM 32,000. 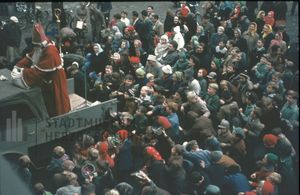 In 1957 the ‘Nikolausfeier’ was held in the Marktplatz. St. Nicholas distributed gifts to the children of Herzogenaurach in this traditional catholic celebration. 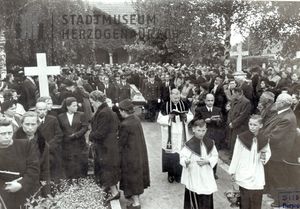 In 1953 the double murder of the Maier siblings shook the town. The perpetrator carried out his act with a pistol. A large proportion of the Herzogenaurach population attended the funeral. 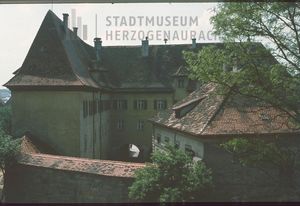 The ‘Schloss’ of Herzogenaurach

Herzogenaurach’s Castle has a long history dating back to the 12th century. In the 1950s it was owned by the State of Bavaria. It housed a district court, the police and the local health insurance office. 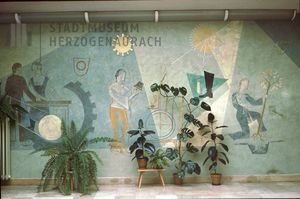 In 1953, the Sparkasse expressed interest in the vacated old school building on Marktplatz 2. At the end of 1955, the topping-out ceremony for the new building was celebrated. It was not until 1969 that the bank moved to its current location. 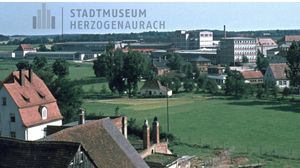 In 1955, the Bavarian Broadcast Corporation (Bayerischer Rundfunk) reported under the title ‘Work creates a home’ about the industrial town of Herzogenaurach. The was given a facelift thanks to the settlement of new branches of industry and the associated construction boom in the housing sector. The Johannes Glock paper mill and the Theodor Fröhner cloth factory, as well as the two Schaeffler brothers' plants, settled in the new industrial area. 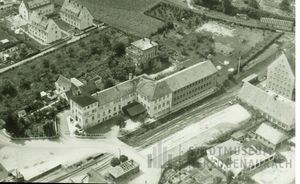 Adolf Dassler had worked his way up from a baker's apprentice to a shoe manufacturer. Since 1948 his company has traded under the name ‘adidas’. In 1948 Rudolf Dassler went his own way with his company PUMA. Sports shoes ‘Made in Herzogenaurach’ were sold all over the world. 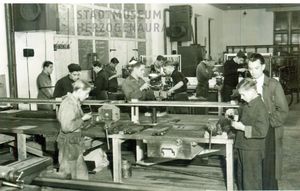 Right from the start, ‘INA’ attached importance to the training of skilled workers. Training workshops were set up in the late 1940s and were expanded at the end of the 1950s. 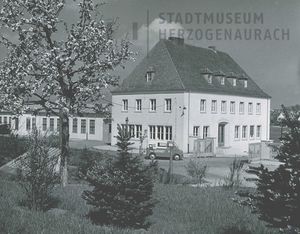 In the post-war period, a whole generation of schoolchildren grew up with exercise books from Herzogenaurach. Further products of the paper processing plant, which had relocated to Herzogenaurach in 1944, were drawing pads, photo albums and business papers. In 1958, after the sudden death of its manager, the family run company was. 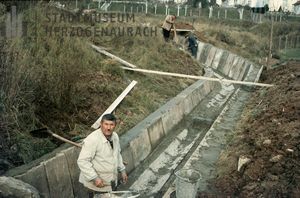 The infrastructure had to keep pace with the town's growth. In 1945 large parts of the urban area did not yet have a sewage network. In 1956 alone, sewer construction devoured more than DM 285,000. 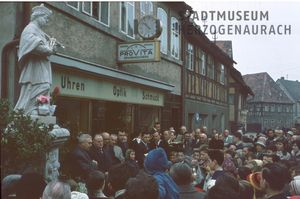 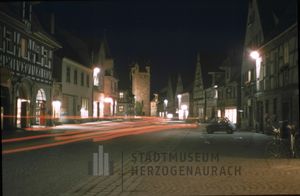 In 1953 the first fluorescent lamps were installed at various locations in Herzogenaurach. Including Bahnhofstraße and Hauptstraße.